Ten Tough Women Artists Who Stand Up to the Bad Boys

In a male-dominated art season, here’s where to find female artists who cut, change the rules, explore new horizons, and do it gangsta-style

“This is an art season that could make you think that the feminist movement never happened,” art critic Deborah Solomon said on WNYC last month.

The fall lineup–Balthus at the Met, Magritte at MoMA, Chris Burden at the New Museum, Robert Indiana at the Whitney, Robert Motherwell at the Guggenheim, and Mike Kelley at MoMA PS1–makes it seem as though the bad boys are not the artists, but the people who program the city’s art museums with a depressing consistency of race and gender. It made Solomon wonder out loud if it’s time to change the rules. Should museums, she asked, be forced to give equal time and space to women?

The question had bloggers Whitney Kimball and Walter Robinson speculating whether mandatory affirmative action for women, like the kind Title IX offers for college sports, could get museums to change their tune–or at least the conversation. But no law could stop Gagosian, to mention one recent, much discussed example, from putting 34 men plus Kim Gordon in its current London group show. Or solve the incredible whiteness of most of America’s art museums.

There’s some good news, though. Women might be finally getting credit for cave painting, for one thing. Also, the feminist sensibility is alive and well in other art venues around New York, if you know where to look. Here are ten examples:

Free Radical
Isa Genzken got into art school in 1969 by crumpling the paper she was given to draw on and throwing it on the floor, launching a career of oppositionalism, radical inventiveness, and theatricality she has expressed over four decades using photography, film, performance, found objects, sculpture, and her own body.

Though she made a small splash here with her 2000 show “Fuck the Bauhaus,” New Yorkers probably know the 64-year-old German artist best for her giant Rose II sculpture that adorned the New Museum. Now her full, chaotic achievement is finally in the spotlight with a retrospective opening November 23 at MoMA (and traveling to its co-organizing institutions, Chicago’s Museum of Contemporary Art and the Dallas Museum of Art). 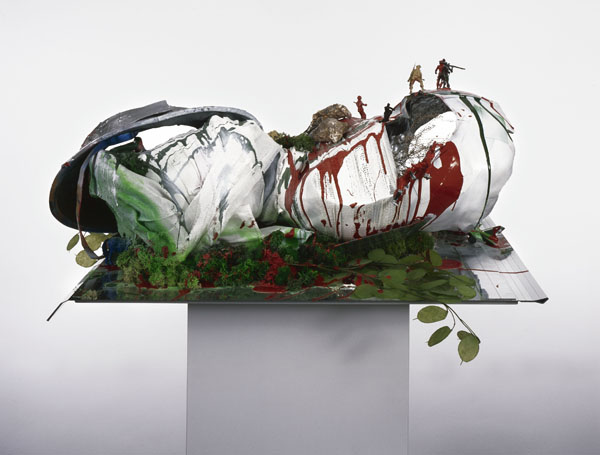 Space Is The Place
Apocalyptic visions of another kind infuse a triptych by Mehreen Murtaza that represents the urban, the alien, and the divine. The Saudi Arabian–born, Lahore-based artist is part of “The Shadows Took Shape,” an interdisciplinary exhibition opening at the Studio Museum in Harlem on November 14. Haunted by the recurring ghost of musician Sun Ra, the show explores the utopian, dystopian esthetic of Afrofuturism, the genre where science fiction, fantasy, magical realism and pan-Africanism converge. 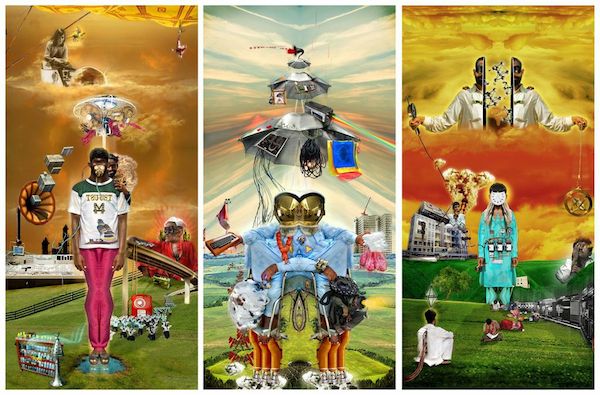 Sampling, ca. 1800
Meanwhile, back in 1800, Connecticut resident Laura Hyde was imagining the other ends of the earth, newly united by international trade routes. She was all of 13 when she made the “Harem Sampler” in “Interwoven Globe,” the fascinating textile show at the Met. On the left of the sampler, embroidered with silk on linen, is the Bay of Bengal. On the right is a Turkish harem Hyde read about in a published letter by Lady Mary Wortley Montagu, the glamorous wife of an English ambassador. 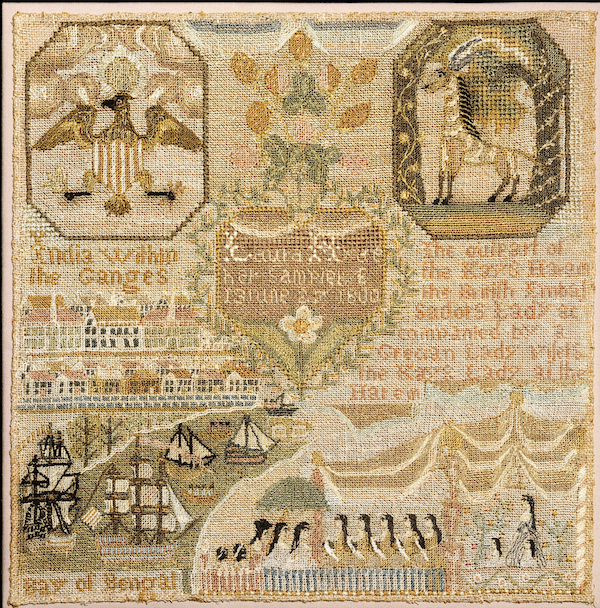 Optical Allusions
In a hybrid language where East meets West, and Pop and Op come filtered through the sublime patterns of the mirrored glass shrines of Shiraz, Monir Shahroudy Farmanfarmaian creates her dazzling abstractions. The nonagenarian artist, now living in her native Iran after years in the States, maintains an active career, with an opening at Haines Gallery in San Francisco this Thursday. In New York she is represented by four paintings in Iran Modern, at the Asia Society.(Update: co-curator Fereshteh Daftari writes to say there is a fifth piece, a small mirror the artist exchanged as a gift with Andy Warhol.) 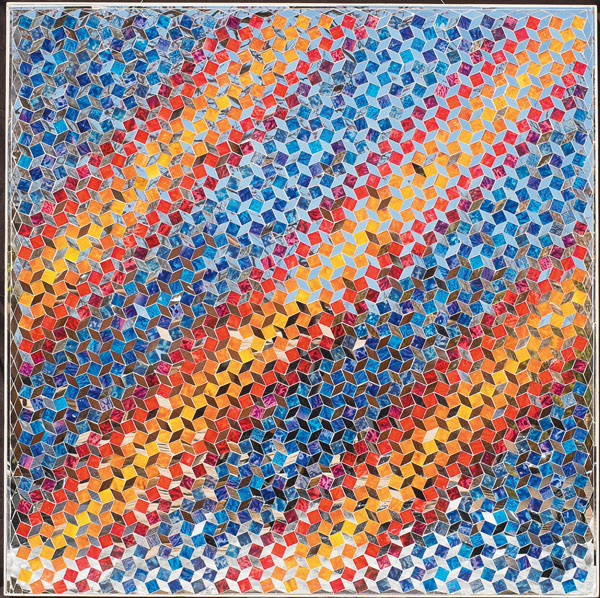 The Body Electric
A working lamp by the Polish-born artist Alina Szapocznikow in “Counter Forms,” an exhibition organized by Elena Filipovic at Andrea Rosen that brings together four postwar artists who probably didn’t know each other, or even of each other, but were united by a sensibility that draws equally on attraction and repulsion. Szapocznikow, Tetsumi Kudo (from Japan), and Americans Paul Thek andHannah Wilke rejected the reductive, arch sensibilities of Minimalism and Pop for a deliberately anti-heroic sculpture, abject and visceral, that was crafted with new, experimental materials and infused with sexual candor and dismembered body parts. 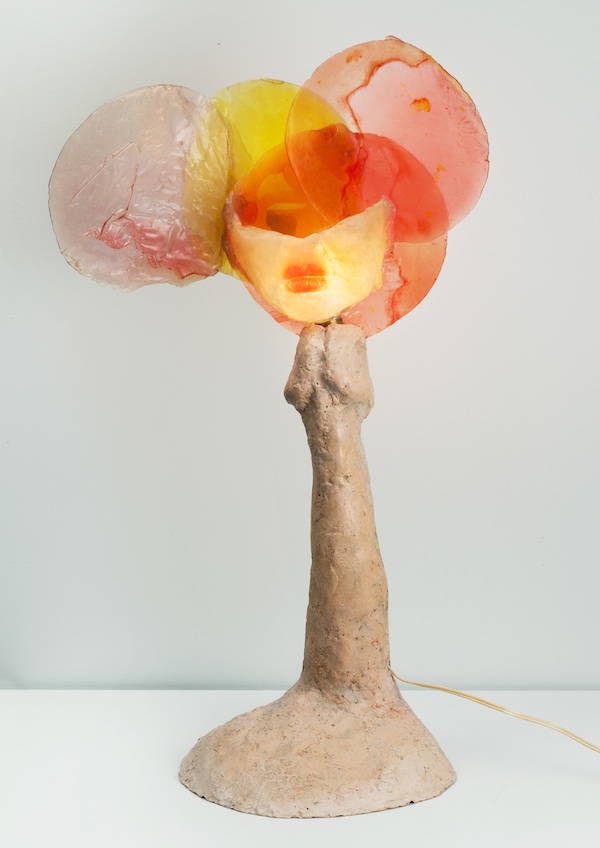 Earth Work
The main theme at Creative Time’s Summit last weekend was Place, particularly the idea of artists moving from one to another to work–whether by installing Land Art (which Lucy Lippard likened to a kind of gentifrication) or trying to effect change on the ground. Warnings went out to those newly minted Social Practice MFAs: think about Collaborative Placemaking, a more nuanced, holistic approach to public art projects that involves local communities.

Mary Beth Edelson has been on the job since the ’60s. Her current show at Accola Griefen features drawings, documents, scriptbooks, and more from 25 collaborative performance rituals and community-based workshops she staged starting in 1969. Along the way she came up with some ideas to reclaim the land from Earthworks. 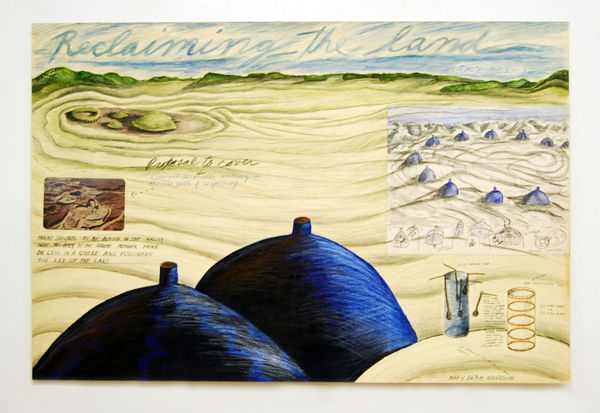 All By Her Selves
Eleanor Antin, the shape-shifting artist who helped bring narrative and fantasy to performance, is in the spotlight this season, along with an entourage of her alter-egos. At Columbia University’s Miriam and Ira D. Wallach Art Gallery, “Multiple Occupancy: Eleanor Antin’s ‘Selves’” surveys various identities—including a deposed king, ballerinas, nurses and an exiled film director—that the artist created and embodied between 1972 and 1991. As Antin put it, “I consider the usual aids to self-definition—sex, age, talent, time and space—as tyrannical limitations upon my freedom of choice.”

On November 9, as part of Performa, the performance art biennial, the Wallach presents “An Afternoon with Eleanora Antinova (a.k.a. Eleanor Antin).” The artist will read and discuss excerpts, some unpublished, from the memoirs of her invented character Eleanora Antinova, the long-suffering African American ballerina of Diaghilev’s Ballets Russes. On November 12, Antin will appear in conversation at Performa with her sometime collaborators, Malik Gaines and Alexandro Segade, members of the collective My Barbarian. They’ll chat about the theatrical devices performance artists rely on to twist and transform identities. 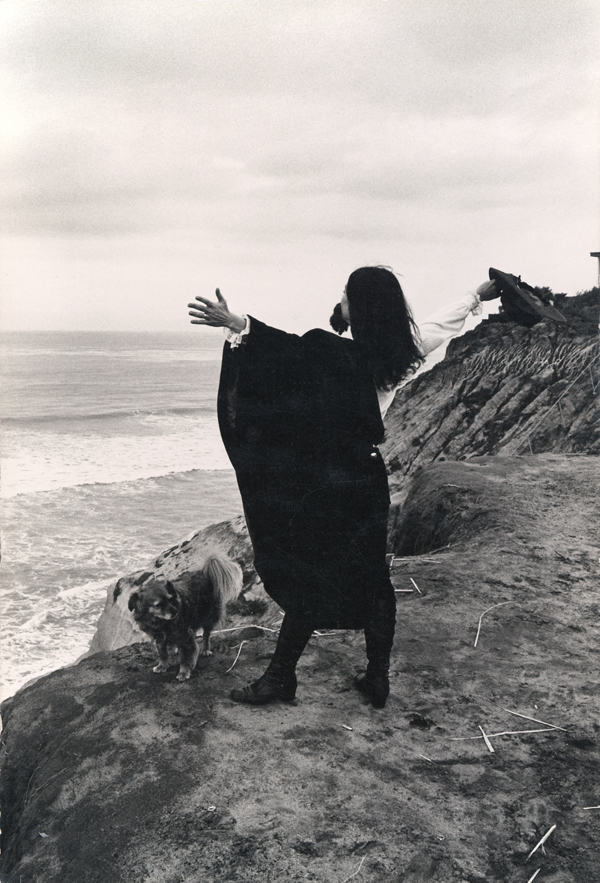 Eleanor Antin, “Men” from The King of Solana Beach (detail), 1974-1975, five black and white photographs mounted on board.

Stretching Boundaries
Radical Presence, the survey of black performance art that is up at NYU’s Grey Art Gallery and continues at the Studio Museum, might be male-dominated, but it has some serious female heavy hitters: Senga Nengudi, Lorraine O’Grady, Xaviera Simmons, Carrie Mae Weems, Tameka Norris,Coco Fusco, Chitra Ganesh, Simone Leigh, and Maren Hassinger. (Adrian Piper asked to be removed from the show last week.) Two of these artists will also appear in a double bill at Performa, on November 14.

R.S.V.P., the structure in the series Nengudi first made in the ’70s out of pantyhose and sand, will “activate” at the Studio Museum as performers Maren Hassinger, Regina Rocke, and Marya Wethers move through the composition. 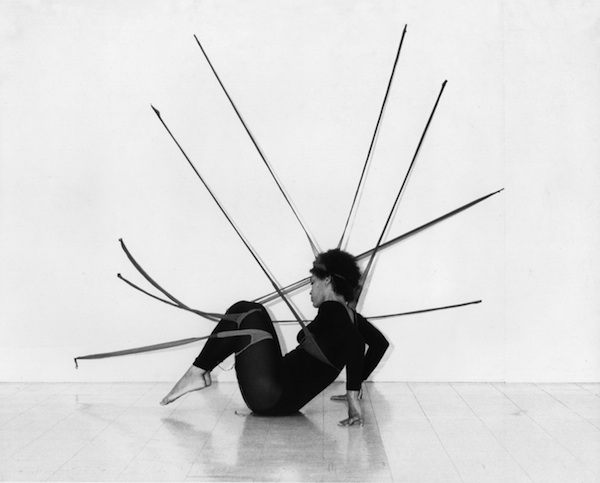 Not Cut Out for Painting?
In a reprisal of her piece Untitled (2012), Norris will slice her tongue with the single stroke of a knife blade and drag it deliberately along the gallery wall, replacing brush and paint with her mouth and bodily fluids.

The work, partly a reaction against a professor’s criticism that she “did not paint” as an MFA student at Yale, is painful for the artist, and for the audience. When Norris performed the piece at Houston’s Contemporary Arts Museum, curator Valerie Cassel Oliver recounts in the catalogue, it provoked “audible and muffled gasps as well as a wave of flinching and cringing from the audience…Although she read no manifesto, it was clear that she was challenging the practice of painting, the art academy, and the canon of art history, and she was doing so gangsta-style.” 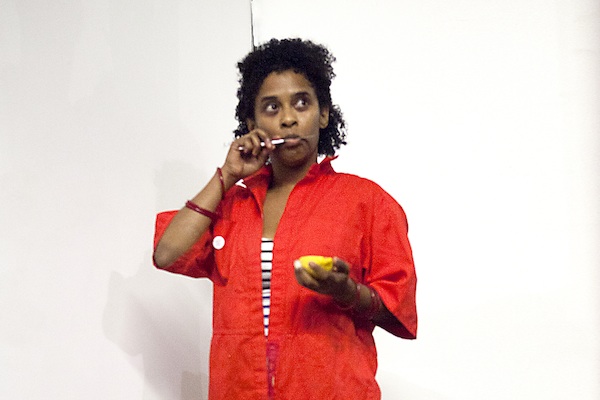 Collages That Jump Off the Wall
No one cuts like Wangechi Mutu, the Kenyan–born, Brooklyn-based artist whose “Fantastic Journey” at the Brooklyn Museum features more than 50 works, including large-scale collages, sketchbooks, videos, installations, and more. Mutu (who is also in “Shadows Took Shape”) uses her fantastical female creatures to allure and disrupt, commenting on issues like race, gender, colonialism, and the exoticization of the black female body. 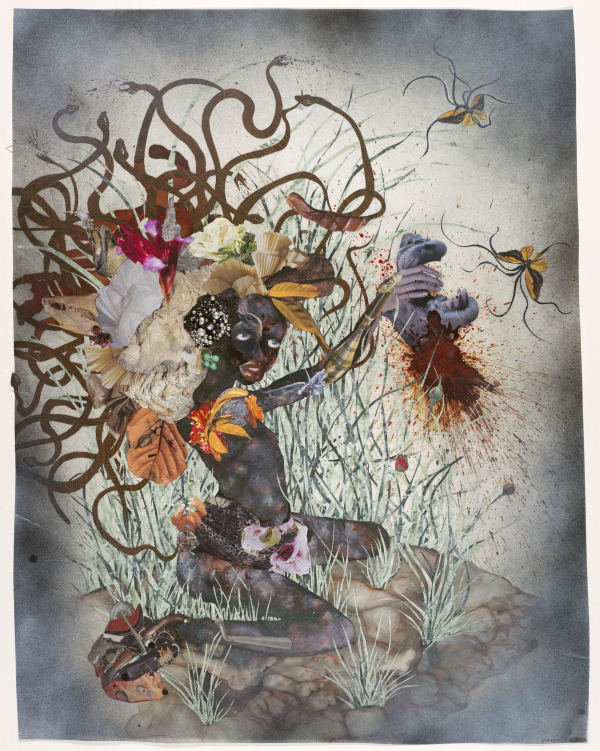 Wangechi Mutu, The Bride Who Married a Camel’s Head, 2009, mixed-media collage on mylar.

Honorable Mention: A Head of Her Time?
We can’t conclude a post about tough women without a shout-out to the Art Institute of Chicago, where Artemisia Gentileschi’s most violent and famous painting is on loan from the Uffizi.

Gentileschi’s Judith Slaying Holofernes (ca. 1620), the iconic, gruesome scene that is often interpreted as revenge for the artist’s rape, is the centerpiece of “Violence and Virtue,” an exhibition up through January 9. The show explores the painting in the context of Gentileschi’s career, and looks at the ways other Renaissance and Baroque artists depicted Judith, the biblical heroine who saved the Jews by seducing the Assyrian commander and severing his head. 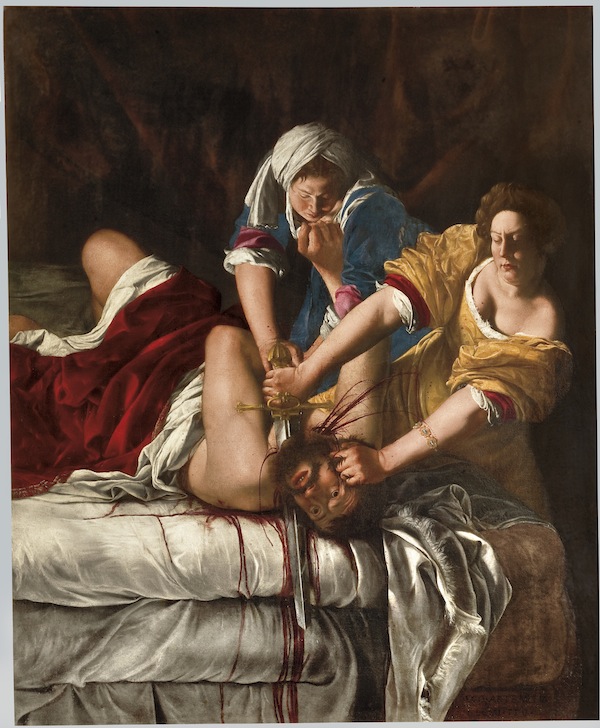